Talkdesk is growing and as that happens, we are expanding our engineering team outside of Portugal. Simon (@O1O1O1O) is the first engineer working from our San Francisco HQ. While he was reviewing a PR of mine a few days ago, he noticed my use of a trailing comma and wondered if it was intentional.

Here is the interaction: 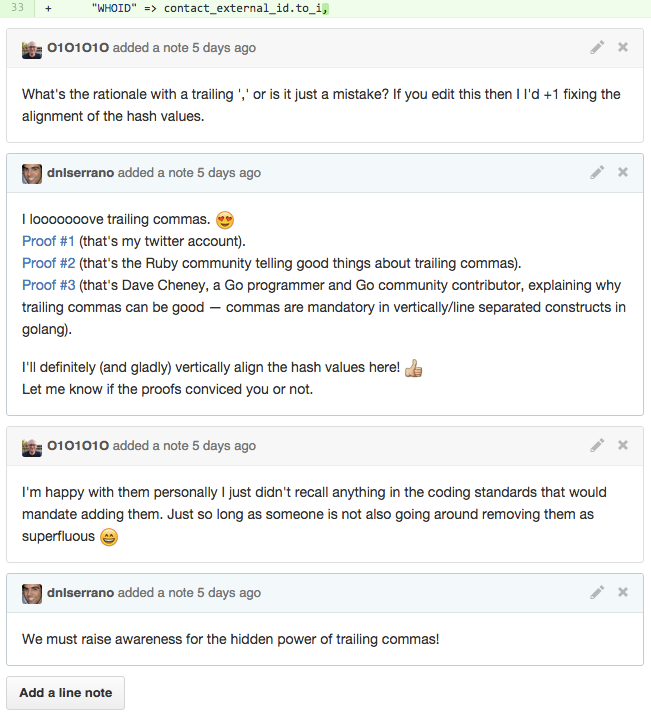 The trailing comma was indeed intentional.

First, I proved I’m a big fan, as I had stated in my twitter account in the past. That’s Proof #1 for you, right there:

i love me some trailing commas

And there are reasons for that. But first, how did I get to trailing commas? Well, if you read my full interaction with Simon there, you’ve guessed it by now. I have been learning Go in my spare time. I am yet to code my own package (if you have any ideas about what I should do, please leave them in the comments below!).

Anyway, Go enfores the use of trailing commas. Now you may ask two things:

To answer the first question, I shared with Simon two links that I had ran into when reading about Go and particularly the use of trailing commas.

The link for Proof #2 (which, now that I think about it, doesn’t really stand for proof that I love trailing commas) is this one. It is a thread in a Github project for “a” Ruby Style Guide™. I would encourage anyone to give it a read. I consider there are some very valid points in favor, but YMMV.

For Proof #3, I brought a Go guru to the table: Dave Cheney. As you can read in my interaction with Simon, Dave is a Go contributor. He is an influent one (check out his talk on Go and simplity when you get the chance). He introduces the benefits of trailing commas when working with a version control system (read: Git).

Overall, there are some arguments in favor and against, and the ones in favor completely win as far as I see it. Mainly because there are a lot of problems that I have myself faced when dealing with Ruby code. Here are some highlights:

Now imagine you want to change line 2 with line 3, of the hash key-values. In Sublime (yes, still at it :sadface:) I simply have to do Ctrl + Cmd + Up, Ctrl + Cmd + Down to move a line up and down. But I would still have to go and add a trailing comma to line 2 and remove the one from line 3 (if I consistently choose to follow the style of not using trailing commas).

Another useful functionality that Sublime offers out-of-the-box is the multi-selection of words/terms (Cmd + D). For instance, if I wanted to turn the previous integer values into symbols (for some weird reason), I could not use the trailing comma (,) as the “compass character” (i.e., the character used to get to the integers), because in that way I would only be able to select the commas on the first two key-values.

Of course in this case, since we’re using a hash, it would become easier, because we could use the hash rocket (=>) as the “compass character”. Still, it becomes more difficult.

If you change an array to accomodate one more value, you don’t have to get “two lines changed” in the diff (+2, -1). You should only get a line addition (+1) since that’s what you went there to do!

Still regarding the previous change, it’s easy to understand that git blame becomes harder since the exact commit over a given line might happen to be one of someone that had nothing to do with the addition of the key-value pair :second_value => 2. The person that changed that line might have only added the trailing comma to accomodate a new key-value pair in the hash. You can always look at the history, I know, but it’s again that extra step that bothers me…

But why does Go have this imposition after all?

Again, Dave Cheney comes to the rescue and hints for the reason in his blog post. A better explanation, I think, is given by Evan Shaw in this Google Groups thread.

It’s because of automatic semicolon insertion. Semicolons are automatically inserted at the end of a line in many situations, including when the last token is a parenthesis. The comma tells the compiler “don’t insert a semicolon here; this isn’t the end of a statement.”

Right now you’re probably thinking: “Look at this guy… He should spend more time on vim and less time writing about using trailing commas in Ruby, lol. He does not achieve half my productivity with that Sublime thing…”.

As Dave Cheney put it “It’s the little things that make the difference.”